Welcome to Divisions, the Wiki About Push! The way the site works allows anyone to edit and contains any and all information about the movie Push and any other Push merchandise. Therefore, this wiki divulges plot details and contains spoilers. Reader discretion is advised.

The sixth and last issue of the Push comic has been released.

Yet to be decided. 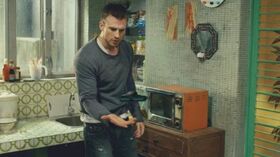 Nick Gant moves a gun over his hand.
Read more...

"Let's see if you can push me before I pull the trigger."
―Nick Gant, threatening Henry Carver[src]

*...that young Nick Gant was portrayed by Colin Ford, who's majority of roles is playing younger versions of characters in flashbacks?

*March 28, 2009: The site is officially up and ready. New skin has been added, and we are trying to get new users!

Retrieved from "https://push.fandom.com/wiki/Divisions_-_The_Wiki_About_Push?oldid=4319"
Community content is available under CC-BY-SA unless otherwise noted.